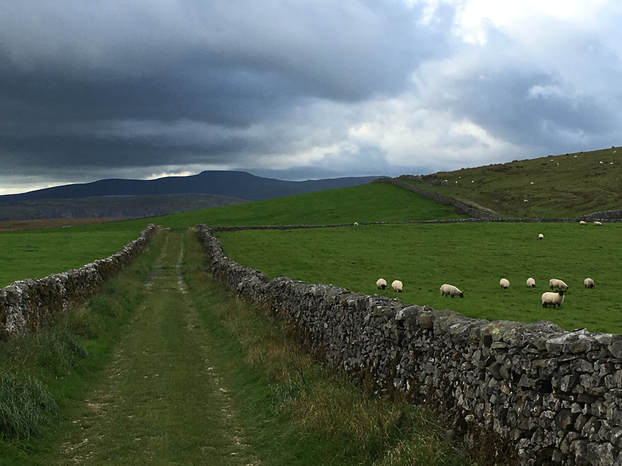 
Choose a fine day for this medium length walk above Settle and across Langliffe Common towards Malham tarn.  There are long stretches where there’s no mobile signal and you may not see a soul, so be sure that mist or low cloud are not expected.
​
Paths are well defined on bridleways and country lanes and there are stunning long distance views all the way round.

Park at Langcliffe on the B6479 2 miles outside Settle.

When I was seven years old, we lived for about 4 months in an old miner’s cottage at Arcow just outside Settle, whilst we renovated an old schoolhouse near Gisburn.  I have fond memories of Saturday morning trips into Settle in my Mum’s green A35, called Niffy nine-ten on account of its number plate being NFY 910.  Parking on the market square, we would buy the weeks groceries at various little shops (no big supermarkets in the mid sixties) and then have lunch in Ye Old Naked Man café.

Travelling up to Langcliffe yesterday, I decided to treat myself to a bacon butty in said café before I strode up into the hills. The café dates back to 1663 and was originally a pub.  Local legend says that a naked man was found buried there and  that it was once home to an undertakers, but, whatever the history is, I was happy to find that the food was still yummy and the service still friendly.

Driving on to Langcliffe, I parked up in the village car park next to the little old school.  Driving along the B6479,  you would not know that behind the cottages on the road side, there’s a beautiful little village; old cottages nestling round a village green, a Jacobean Hall where Isaac Newton was a regular visitor.  In fact he is said to have gained his inspiration for his theory of gravity in the hall’s orchard.

Boots on and poles in hand (actually I forgot them and had to come back for them when I got half way up the lane and wondered why it seemed such hard work!) I walked past the pretty church and on up the road that leads to Malham.  It was a steep start to a walk and I was soon unzipping my jacket and taking my hat off! About half a mile up the road, there’s a sign for the Pennine Bridleway and as the road veered to the left I took the bridleway straight on.

The bridleway weaves its way over moorland, past an old deserted barn and there’s a signpost to Victoria Cave if you fancy a little detour, but I’d been late setting off due to my bacon butty stop, so I pressed on.  Ingleborough was dark and brooding far off to my left but the sun was trying hard to break through the gauzy cloud above me.

It was very windy the higher I climbed and I realised as I rounded the back of Langcliffe Scar, that I was going to be battling the wind for the next few miles.  However, there was a real treat in store for me as I turned east; Penyghent was in full sunlight and her craggy profile set against the surrounding fells was stunning.  I knew that there would be tens, possibly hundreds of people walking up to the summit and I was glad that I was all alone with not even a sheep for company!

Passing by a wood, I stopped to listen to the wind in the fir trees.  The sound was powerful and exhilarating like the big choral moments in Handel’s Messiah.
Wow, with the wind whipping round my face and the wide skies and the hills rolling on for miles, it really was a moment to remember.

A long solitary stretch now and I did wonder several times if I’d missed my footpath off to the right.  There are shake holes and disused mine-shafts up on these fells, so you have to stay on the well defined paths.  Along the way, I passed strange patterns of limestone boulders that looked like jigsaw pieces and  thought what a great place to bring children and let their imagination run wild.

The weather was looking grey ahead and misty over the fells and there were spots of rain in the wind,  but I was fine, after an hour or so, there was the friendly signpost pointing the way to Stockdale Lane phew!

Turning right over Grizedales, I walked by highland cattle, who looked up at me from their chewing and I thought how wonderfully warm their furry coats looked.  It was raining now but there were breaks in the clouds ahead and my Gortex was doing its job well.  Sure enough, after twenty minutes, the rain cleared and the sun shone as I reached the next wooden signpost and turned right under Kirky Fell and Rye Loaf Hill.

Time for lunch now and hot flask coffee. There’s really nothing quite like finding a stone that’s just the right size for you and your rucksack and settling down in a sheltered spot with a stream gurgling away in the bottom of the valley and long long views.  To sit in silence, thinking of nothing other than the wonder of it all.  This is what I walk for, the feeling of being completely at one with nature, completely responsible for myself, completely in awe of the universe doing its thing so beautifully no matter how much mankind tries to destroy it.

Ah well, time was travelling on as it does and I was aware of that change in light that happens around 2.30pm on a winter afternoon and a shift in temperature that signals the move towards dusk.  Holding my flat hand to the sun, I counted the fingers between the sun and the horizon – one hour til sunset for each finger, so I reckoned I had 2.5 hours left to get back to the car.  Plenty of time.

Striding down the valley side towards Stockdale Lane the path was slippy due to the short shower, so I was glad of my poles, but I made good time to Stockdale Farm, which must be the tidiest farm I have ever seen.  The silage bails are beautifully stacked, the yards are clean, the farm buildings immaculate, it always impresses me.

Past the farm and onto the tarmacked lane now and eventually right at the T junction to walk the mile or so downhill into Settle, then through the tiny lanes of jumbled cottages at the top of the town, keeping to the Pennine Bridleway signs and then up and over the fields for the last mile and a half to Langcliffe.

Dropping down into Langcliffe and my first conversation with a human being! A very nice man called Dave who had been a caving instructor all his life and who now has a boat which he often moors in Carsaig Bay on the Isle of Mull.  As this is where my daughter Amy lives, we were soon remarking what a small world it is!

As I entered the village I noticed that there was a book sale sign on the church entrance so I went to investigate.  The big old church door was unlocked and the lights came on automatically as I went in. I was soon lost in the cookbooks and the walking books and every genre of fiction you could imagine, then click, the lights all went out and I couldn’t see a thing.  I was wandering around feeling my way past stacks of books and around pews finding the door and wondering why the lights wouldn’t come back on even though I’d opened and closed the door!  In the end my eyes grew accustomed to the dark and I managed to find my rucksack and poles and put my £4 in the metal honesty box and pick up my 4 books and find my way out.  Laughing to myself, I wandered back through the village to the car, stopping to photograph a cherry tree in full pink blossom – at the end of November no less; and some people are still denying global warming.

There was the car and so ended my Bacon, Boots and Books adventure.  Face glowing and legs aching in the best possible way, I turned towards home and another working week.