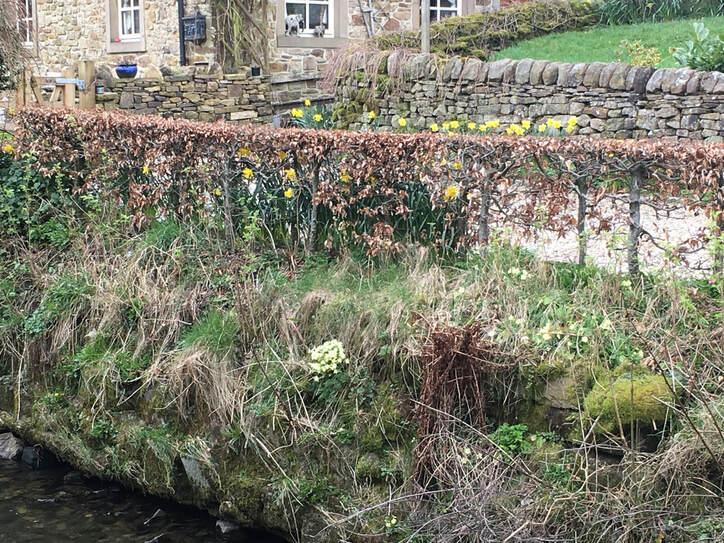 (Pendle Hill on a cloudy day)

This is a fairly short walk but it’s a stiff climb with amazing views as your reward.  Choose a midweek day (not in the holidays) if you can, because otherwise you could be walking in a queue of people!


Yesterday dawned fine but cloudy and according to the BBC, there was no chance of rain.

I, on the other hand was definitely feeling cloudy with a very high chance of tears (rain), it being four weeks to the day since my lovely Mum died.

A difficult day then and one where I needed some willpower to get outside and walk.

The walking had gone by the wayside a bit, as you can imagine, what with all the arrangements and keeping the business going, but I know how much better I feel out in nature and I also know that I have to keep getting the miles in as I am walking the West Highland Way at the end of May.

I had a client meeting at noon near Skipton, so I needed a walk that would take just a couple of hours, but I also wanted to wake up those calf muscles, so Pendle Hill, just 20 minutes drive away, was a good choice.

Barley car park is mad busy at weekends and during holidays, but at 9am on a Wednesday morning in March, mine was one of only 4 cars there.

Boots on, poles in hand, I set off through the village, admiring the daffodils and the green leaves peeping through on the hedgerows.  The old cottages on the roadside are witness to thousands of people each year heading up onto the Pendle Witch Way, but this morning there were only one or two others ahead of me.

The sky seemed low and heavy and trying to lift my mood felt a bit like trying to hold up the sky, but as I turned left just after the garage and walked up the side of the babbling brook, I spotted the first few clumps of primroses and couldn’t help but smile remembering the story of my Dad and his potent home-made primrose wine.

Between the ages of 7 and 11 I lived in Newby, a tiny hamlet, near Gisburn in the Ribble Valley.  These were idyllic childhood years roaming the fields and lanes all day long in the company of good friends, camping out in the woods on the lower slopes of Pendle hill (the very hill I was walking today) and joining in all the village activities in the Village Hall at Rimmington.  Halcyon days which I am so thankful for.

Dad enjoyed making home made wine and had started with the kits, but when we moved to the country he got more adventurous and made wine with elderberries, rosehips and finally, his triumph, primroses!  He needed about 20 buckets of primroses to make about 4 bottles, so he promised me and 3 friends 6d (that’s 2.5pence now) per bucket.  6d could buy quite a few sweets back then so it seemed a good deal to us.  Thankfully there were far more wild primroses then, but it was still 2 days of back breaking work toiling up and down the steep banks of the streams!  However, the wine was worth it, (I got a little glass), it was like golden nectar and became much talked about.  He only ever made it once though and so it became a legendary tale!

Anyway back to my walk up Pendle Hill.  You really can’t get lost on this walk, it is so well signed and after the first ten minutes or so on a little lane you cross a couple of fields, the great bulk of Pendle looming up ahead of you and turn right round the back of Brown House Farm and then left through a kissing gate.  Soon you can choose whether to keep right and climb the many stone steps to the summit or zig zag up the path to the left.  I chose to go left as I’m not at my fittest at the moment.  At this point I parted company with a lovely lady called Anita whom I’d made firm friends with over the last half a kilometre!  Walking does that, you stop to let someone past, end up talking, share anything from just a talk about the weather, to comparing other walks, to getting into some really deep issues.  I found myself telling Anita why I was finding it tough walking today, she ended up giving me a big hug and it really helped.  So thank you Anita, if you ever read this, you really started to lift my mood.

It has surprised me how much grief exhausts you.  Even though I had been preparing to lose Mum for many months and years, due to her sad decline into dementia, it was still a huge shock.  There’s a weird feeling also of having somehow lost my roots, now that my second parent has died.  I am so lucky I know, to have a wonderful husband, 4 happy, healthy children and a new grand-daughter, but it’s the end of an era, the end of being a daughter and it just feels odd.  And so, as I made my way up the zig-zags, I found myself really out of breath and had to turn and look at the view many times!

But what a view when I turned; 8 miles to the South of me was my own Boulsworth, the hill I climb most regularly as it’s on my back doorstep.  Over to the East were the fells around Skipton, to the South-west, the sprawl of Nelson, merging into Burnley.

Eventually, the trig was in view and so was Anita, heading towards me from the trig!  Another short chat and a fond farewell as she headed off down the zig-zags back to her busy life and three children and her plans to scale Ben Nevis in June and the Canadian Rockies next year for charity – aren’t people just amazing?

At the trig as I patted the top, I said, as usual “Hello Dad” and for the first time, “Hello Mum” and I remembered the times they had been with me at that very trig as a child when soggy tomato sandwiches and an apple were our reward for making it to the top.  Today after marvelling at the 360 degree view across the Bowland fells, the Yorkshire Dales and the Darwen moors, I tucked myself down behind the stone wall out of the biting wind and enjoyed my coffee and a naughty cream egg!

At this point it dawned on me that my mood had really lifted and I set off down the hundreds of steps with a spring in my step.  On the way down I chatted to an Indian family whose favourite walk is Haystacks, (Wainwright’s favourite too), an Asian family climbing Pendle for the first time, two young lads on a quick hike up and 2 female runners with spaniels bounding ahead.  How wonderful that walking appeals to so many different people and what a lesson in showing us that we are all drawn to nature, no matter our culture or beliefs.

The sky was still grey as I retraced my steps back through the village past those same old cottages, but my spirits had lifted.  The wind, the birdsong, the babbling brook, the pull in my leg muscles on the steep climb – they were all reminders that life goes on.  Strangers had been kind and nature had been there as it always is, miraculously bringing forth its buds and blossom each Spring.

Life is a cycle, so get on your bike and ride, push on up the hills, even though your lungs feel like they are bursting and shout with joy as you freewheel down.  Those hills might be heartache, poor health, loss or disappointment; but never forget that when you’ve made it up each hill, you can look back and see how far you’ve come, you can give yourself a huge pat on the back and as the Lighthouse family used to sing: