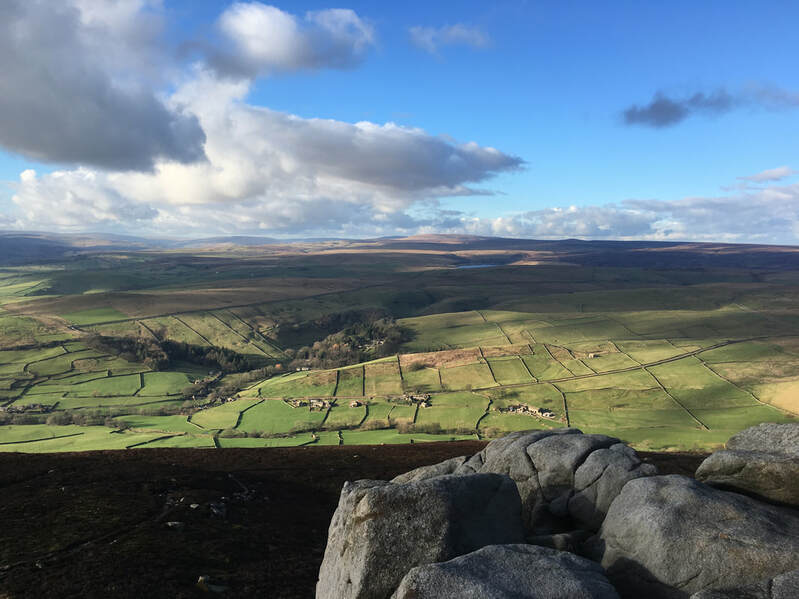 
A lovely varied walk on clear paths so it’s suitable for winter or summer walking with a lovely café at the beginning or end!

Waking on a Sunday in mid February, I wasn’t sure what the day was going to bring, it was all looking a bit murky and grey out of the bedroom window, but when I checked the BBC weather forecast for the Skipton area, sunny intervals were forecast from lunchtime onwards, so I got the maps out!  I quite fancied picking up the Dales way at Flasby – I love those low and rolling hills and valleys, but I really needed an OS explorer map of the area as the one I have is a Landranger one I picked up by mistake and as such,  the detail isn’t great for walking.

Still intending to walk above Flasby, I packed up the rucksack with a nice Lancashire cheese and pickle butty and my customary flask of coffee and set off via Skipton, where I bought the requisite map.  Next to the maps were the walking route books and so I treated myself to ‘Walking in the Yorkshire Dales – South and East’ by Dennis and Jan Kelsall, which I had a quick look through over a cuppa.  The walk up to Simon’s seat above Bolton Abbey looked interesting and was a new one for me so I decided to leave Flasby for another day.

Parking the car on the wide banks of the River Wharfe at Bolton Abbey and reeling from the shock of having to pay £10 for the privilege (!) I booted up and set off over the bridge by the Cavendish Pavilion café which holds fond memories for me as my god-daughter’s wedding reception was held there 2 years ago.  Sunny memories in both senses of the word.

The path leads upwards through woods (not along the river) to a lane where you take a left for a couple of hundred meters until you reach a gate on the right by a pretty cottage.  A clear track leads across the fields as the swell of Brown Hill and South Nab rise on your right.  Immediately I was away from the busier paths of Bolton Abbey and on my own – although I’m sure there will be more people around in the summer.  A stream gurgles away in a ravine on the left and old oak trees with twisted limbs watch you on your way.  It’s a gradual sloping path winding it’s way along through what is called the Valley of Desolation – but there’s nothing desolate about it!  Evidently in 1826 flash floods stripped the valley bare but now it’s quiet beautiful; woods sprawl along the sides and the beck splashes its way down waterfalls and around the boulders, peat dark and frothy cream like an Irish coffee.

The sun was trying to break through and I was boiling in the quilted down jacket my husband had bought me for Christmas, a lovely thought, but I am never cold these days – even in mid winter, so it was soon in my rucksack and I suspect it will spend most of its future in there!

Over the beck, the stony path winds up-wards and soon I was in the woods where a sign-post points clearly ahead to Simon’s Seat.  I stood for a moment, watching a couple of blue-tits chasing each other from tree to tree and listening to their happy song.  Shadows were falling long onto the path and a fallen pine tree lay amongst the winter bracken, its moss covered branches soft and green against the brown and brittle fronds.

Up through the woods and soon the moors were stretching far and wide in front of me.  On through a kissing gate and straight ahead (a path goes off to the left here but ignore this).  Now the moors were all around and the path was clearly visible arching its way and climbing ahead left in front of me.  This is my kind of heaven, moorhens calling, wind in the long grass, the path changing from mud, to boulder, to crunching stone so that you have to watch each step; it’s impossible to think about everyday worries when you’re concentrating on your footing or stopping to drink in the views.

It’s quite a pull up and around the wide flank of the moor and great boulders, dumped unceremoniously by a million year old glacier, sit in silence, watching over you as you plod along, breathing hard, working those calf muscles.  Great Agill Beck tumbles down from Great Agill Head on your left, buzzards wheel in the wide skies and dark and tangled heather carpets the land.  Eventually, the path crosses a series of small tributaries and makes its way left across Nanny Crag.  Quite an appropriate name I thought, as I will become a Nanny for the first time very soon!

Reaching a crooked T junction you take a right and as I did, a couple approaching me smiled and said , “Not far now”.  I wondered if I looked knackered?  I didn’t feel it!  The final half a mile or so to the trig is on rough terrain, picking your way over small boulders and avoiding muddy puddles, up and down over peaty tussocks - probably a lot easier in the summer months. But my poles come in handy on stretches like this and I was soon on the approach to the massive pile of boulders which is Simon’s Seat and that familiar white trig.  Leaving my rucksack and poles, I clambered up, finding footholds in narrow crevices and crawling onto the huge boulders.  It was really windy at the top so I had to hold on to the trig, but heaven was stretching in every direction.  The sky was grey and blue and white and the Yorkshire hills stretched on for ever, in every direction.  Surely one of the most stunning views in the Dales.  I really felt like I was on top of the world.  “Another one Dad” I said, placing my palm flat down on the trig.

I hunkered down out of the wind and had a well-deserved cup of flask coffee and let the beauty of the landscape sooth my soul as the coffee cup warmed my hands.

The descent starts on a flagged path to the South West and as it was already 3pm, I reluctantly made my way away from the incredible vantage point and vowed to return in the Spring when the days would be longer.  The path winds across the moor and descends hugging the side of High Brown Hill; the views across Wharfedale to Burnsall and beyond are simply gorgeous.  After half a mile or so, you reach Upper Fell Plantation, and the path leads through tall pines where the wind was singing in the branches and joins a wider track where you keep right and descend to Howgill lane.  Go straight across the lane down a narrow path and soon you are in the valley bottom with the River Wharfe flowing wide and strong in front of you. The path now leads left downstream for a mile or so to Barden Bridge.  It was now approaching 4pm and the sun had taken on that golden hue so often seen at the end of a fine winter’s day.  It bathed the valley sides, turning the heather orange-gold, brightening the green of the sheep-cropped meadows and sparkling on the river.  All was well in my world.

At Barden Bridge, the ruins of Barden Hall stood proud, her crumbling walls holding on to secrets of battles won and lost.   Her vacant windows, where Lord Clifford once gazed at stars, bear silent witness to love and loss and life and death and the passing of the seasons which all too soon merge into years and centuries.

As I walked back through Strid woods, the Wharfe narrowed, the water swirled and crashed and fell between the dark rocks; the deep underwater currents and rocks here are lethal and walkers are warned to keep well back and never ever attempt to jump across.  It’s a deadly kind of beautiful, it looks like a narrow beck, but several people have slipped into these waters and died.  I kept well back and hurried along as the light was fading and the path is tricky in places.  The woods are steep sided and as the last of the sunlight danced through the branches and dappled the path in front of me, I breathed in the smells of sap and moss and last years leaves and thanked the Universe for allowing me to experience valleys and streams and woods and moors and rivers and lanes and birdsong and smiles and wind and sunshine and excitement and caution and wonder and happiness all in the space of three hours.  And apart from the cost of the car park, which I could have avoided if I’d done this walk from Barden Bridge instead of Bolton Abbey, all of this incredible experience hadn’t cost me a bean!