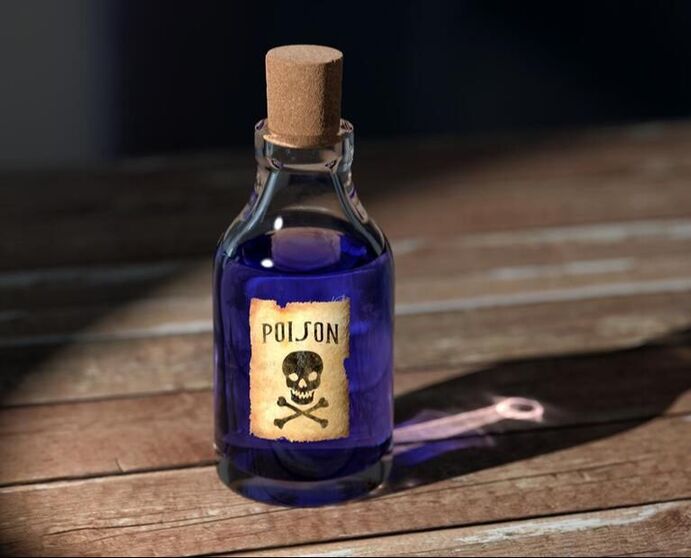 Poison​
​It was indeed a paradox, that a woman whose cooking was guaranteed to delight, could always be counted on to poison a meal so effectively.

It was a slow and invisible poisoning; starting at precisely the moment one thought of an event which demanded a family dinner. First, an uncomfortable feeling in the stomach, next a surge of saliva resulting in a swallow, as memories of previous dinners rose like bitter tasting bile. Then, often lengthy deliberation about whether one could get away with not inviting her to the meal, which inevitably resulted in feelings of guilt gnawing away under the rib-cage. But eventually one would capitulate; there were certain family obligations that could not be avoided.

It was always safer to plan the meal at home, where there was no possibility of the table being in the wrong place, the menu being poor, the wine too expensive and more often than not, the meal being sent back after she’d eaten half of it, with a message for the cook that it was ‘too tough, underdone, gristly or bland’. (There was one particularly splendid occasion where she barged into a restaurant kitchen and offered to teach the chef how to cook a fillet steak.)  When eating out with M, excruciating conversations with the maître D were par for the course, after which a new and free meal was invariably produced.  Everyone then sat and waited a lengthy period for dessert, because M was now working herself slowly and deliberately through a second plateful.  Evidently “Food should be chewed fifty times to aid digestion”.

A 21st celebration for one of the grand-daughters remained uppermost in minds when one thought of the most embarrassing altercations.  M, having consumed several glasses of Chilean wine (French and Australian being totally unacceptable), was faced with a small delay as the waitress had forgotten to relay her dessert order to the kitchen.  With complete aplomb, she started to sing, “Why am I waiting”, whilst simultaneously banging her spoon on the wooden table, as if she were conducting a choir.  Following the occasion, one of her sons-in-law refused to attend any meal where M was present, for a period of two years.

Choosing a restaurant if they were away from home was a particularly gruelling affair.  Traipsing up and down street after street, looking at display menus and through windows at perfectly happy diners who presumably had lower standards than M.  Eventually choosing some poor unsuspecting restaurateur’s establishment, the family would ensure that the table was not near the toilets, that M sat facing into the room and never towards a wall, that the cutlery was clean, that the lager came in a glass with a handle and that the music was not too loud.  All boxes ticked, they could reduce the danger level from def-con 5 to 4, until the moment the menus arrived and M would announce, after an inquisition into everybody’s else’s choices, “I think I’ll RISK the steak!” ‘Oh God,’ they all thought, though no one dared voice it.

The long-term effects of the poison blighted M’s children for years. As a teenager, one daughter literally worried herself sick if she had to eat out, unable to put a morsel of food in her mouth for fear of retching.  When she was older, her partner used to slide her food onto his plate surreptitiously and hold her hand the whole time under the table. It took years for her to enjoy meals out, even once they were married.

The other daughter comfort ate her way through boarding school.  Presumably because, away from the discomfort of mealtimes with M, she could eat without being criticised, questioned, or made to feel embarrassed.

They were all at a loss to understand where M’s behaviour had come from.  Raised in a crowded council house where food was plentiful but plain, by a generous woman whose kitchen welcomed all and sundry, M’s attitude to meals was a mystery.  That her children had to ask weeks in advance if someone could come for tea, when M’s mum had eagerly embraced and fed all who swooped upon her table, was a situation no one understood.  That the ensuing meal was so uncomfortable that friends chose not to return, was sadly inevitable.  As her children reached their teens and discovered the joy of mealtimes without agenda at other homes, they hungrily accepted offers of sleep-overs and short holidays, where it was a revelation to see how other families went about the whole ‘eating’ thing.

In mitigation however, if we are to be generous, all M’s children were excellent cooks, had exemplary table manners and in later life, could be counted on to be amazing hosts.  They knew their Chardonnay from their Sauvignon and their fish knife from their butter knife.  They knew how to lay a table fit for a Queen and prepare a simple supper suitable for a bridge party.  But long after M died, they would hear her voice whenever they looked at the words “Fillet Steak” on a menu and just for a second the stomach would heave, the poison still lingering in the sub-conscious like a spark in ashes, ready to flare.

Oh M, who cared so much for things to be the best, that in doing so, she spoiled the times that should have been the tastiest.  The family meals, the celebrations, the evenings when love should have flowed freely with the wine; times when the joy of sharing a table is multiplied by the simple action of relaxing.

If only we could return M to this world as a young woman and teach her that she was enough; she did not need to worry about her lack of further education, her mispronunciation of ‘Sauvignon’  (Sov – ig – yong), or her spelling.  If we could re-assure her that her style, her creativity and her intelligence were in fact, inspiring; then we could turn that poison into perfume and undo the damage caused.

But it is done and cannot be undone and those who were affected can find the antidote or let the poison fester; it is their choice.  They can learn from her misguided behaviour and explain it to their children, so that they either loathe or love the memory of M.  Let us hope they are kind enough to do the latter.