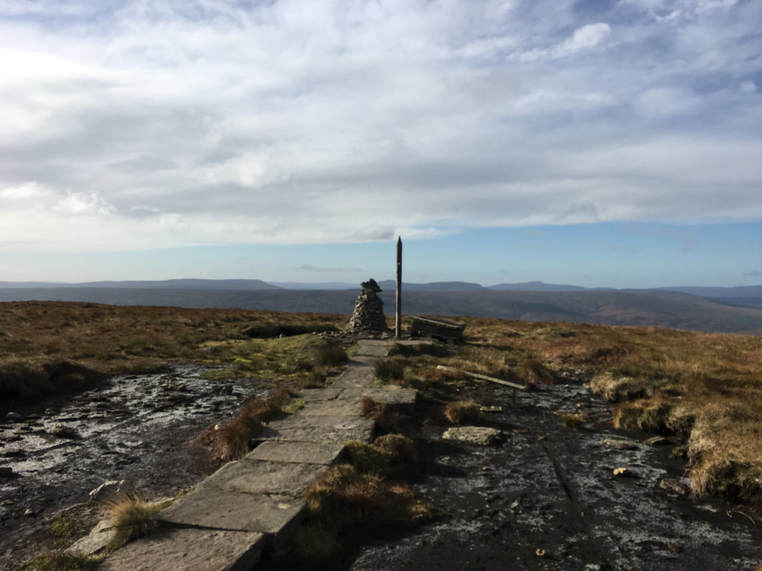 Ticking all the boxes

7 miles, allow 3.5 to 4 hours.
Mostly good paths, make sure it’s a clear day and your phone is charged as you could go the whole walk without seeing a soul!

This walk ticks all the boxes for me.  A steep pull from a sleepy village, a trig all to myself, a 360 degree view of nothing but high hills, a long descent through a hidden valley and a pub at the bottom!

A bit of a grey murky start had me thinking I may not see much on the tops, but there was some blue trying to break through way ahead on the horizon, so I tried to keep positive.  I’d had a hard couple of weeks and was feeling the stress.

There was a biting northerly wind and the temperature had plunged overnight as the forecasters had advised; it was registering only 3 degrees as I parked the car.

Buckden is a tiny village on the east bank of the river Wharfe and I’d briefly visited in the Spring when I walked back along the Dales Way after dropping down from Old Cote Moor.  However, memories of Buckden go way back to my early twenties as one of the first big jobs we secured in our furniture making business was making the pine bedroom furniture for the Buck Inn.  As I parked up in front of the pub I wondered if the bedroom furniture was still going strong 35 years on!

Left out of the back of the car-park is a clear footpath which takes you past Rakes Wood and gradually climbs the valley side.  The views across the valley to Kirk Gill Moor and the surrounding fells are wide and wonderful and apart from a couple walking a few hundred yards in front of me, I had the views all to myself.

I was soon up to the metal gate where you branch right for Buckden Pike and here my fellow walkers and I parted company, as they walked on following the Pennine Journey trail.  The path was a little confusing here as the description said continue on the bridleway but there was no obvious bridleway!  There was a sort of path straight up by the wall and a very vague path going off 45 degrees left.  As the directions said “go through several open gateways in dry stone walls”  I decided to go left as there were lots more walls in that direction!  I did check my map here and realised that the one I had with me was an OS Landranger map and not my OS Explorer one that shows you where the walls are, oh dear!

It was soon obvious that I was on the right path though as I did go through several gaps in walls and there were lots of boot prints to follow, (always a confidence boost!) which eventually led me to a surfaced route.  Here the gradient pulled at the calf muscles and so I stopped for a breather and remembered to turn around and look at the view.  Oh my, all of a sudden I was high enough for the familiar outlines of Penyghent and Ingleborough to break the grey skyline beyond Potts Moor and Plover Hill.  The beauty of it never fails to take me by surprise.
With all my layers on, I was getting warm now so the hat and the gloves were off though the wind was biting as I pressed on up the stepped path.  “Who on earth dragged these flags and stones into place?” I thought, as I silently thanked them.
As a family fairly skipped down the path, I stood breathing hard and wondering why on earth I hadn’t gone back to walking at a much earlier age!  But I was soon up the last steep incline and onto the top and the trig was in view.  I slid a triangular stone into a little gap near the top and said to my long lost loving Dad “There you are Dad, another one we’ve climbed together.”

And then the sun came out.
​
Heading along the ridge, a flagstone path leads towards the War Memorial on the top of Starbotton Fell. Part way along I found a sheltered little spot behind a wall and enjoyed my simple lunch, just me and the weather and the hills; perfect.
The war memorial commemorates the lives of 5 Polish crew-members who were killed on an RAF training flight on 30th January 1942.  Of the 6 man crew, 4 died instantly when the plane plowed through a stone wall in blizzard conditions.  A fifth was seriously injured.  Jozef Fusniak, the 6th member, despite having a broken leg, managed to construct a shelter for his injured crewmate and then followed fox tracks in the snow down to the little village of Cray, but it took a rescue team 2 days to find the wreckage and in the meantime, the injured wireless operator had died.  Jozef (a rear gunner) returned to flying and was shot down just 5 months later in Germany; he spent the rest of the war in a prisoner of war camp. In the 1970s he returned to Starbotton Fell and built the memorial to his crew-mates.  What must he have felt returning to that spot?  I stood, in awe of the courage of all the men and women who died so that I might be free to walk these fells.

Jozef passed away peacefully in July 2017, for further details of his story follow this link http://www.buckdenpike.co.uk/mainstory.html


A signpost and the odd blue topped post showed me the way down to the little village of Starbotton, a two mile gradual descent through a valley where I looked across to stone walls crossing the valley sides like patchwork squares.  “Who built those walls?” I asked the sheep, but they just nibbled and stared and didn’t seem to care.

Down and down, with a short stop for a hot drink from my new pink flask!
The sun fully out now in a blue blue sky and the sparkling river snaking below.  It was a lovely but seemingly long descent and the old knees were complaining at the last half mile or so on a lane where the stones rolled under my boots with each step.

But at the bottom, joy of joys, the Fox and Hounds pub and half a cider, sitting outside in the sun. Then turning left for a hundred yards, I took a right, down a little path which took me across the River Wharfe where I picked up the Dales Way back towards Buckden.  Kicking the leaves and empty conker shells, I walked past woolly bullocks nuzzling each others heads and then I stood for ages looking up at Firth wood, where the spiky green spruce pierced the skyline behind the rusts and yellows of the rounded oaks.  Although not as vibrant as the colours I’d seen in New England just two short weeks ago, to me this small wood, climbing the sides of the valley, was every bit as beautiful.

This side of the valley was in the shade and away from the sun, the icy wind was blowing hard from the North and so I was zipping up everything as far as it would go and wishing I’d brought my furry hat with the ear-flaps instead of my faithful little beanie! But soon I was striding into Buckden and following the sign to West Winds tearooms, tucked away behind the pub, where the very kind owner let me have a pot of tea and a piece of gluten free Victoria sponge even though I was 20p short!  With a roaring fire and a good selection of food, this is a little café to remember on winter walks.

Boots off back at the car, poles stowed in the boot, I drove along the tiny road to Conistone, the golden late afternoon sun slicing through the trees on my right, thinking about my walk and feeling so much sunnier myself than I had on my drive up there!